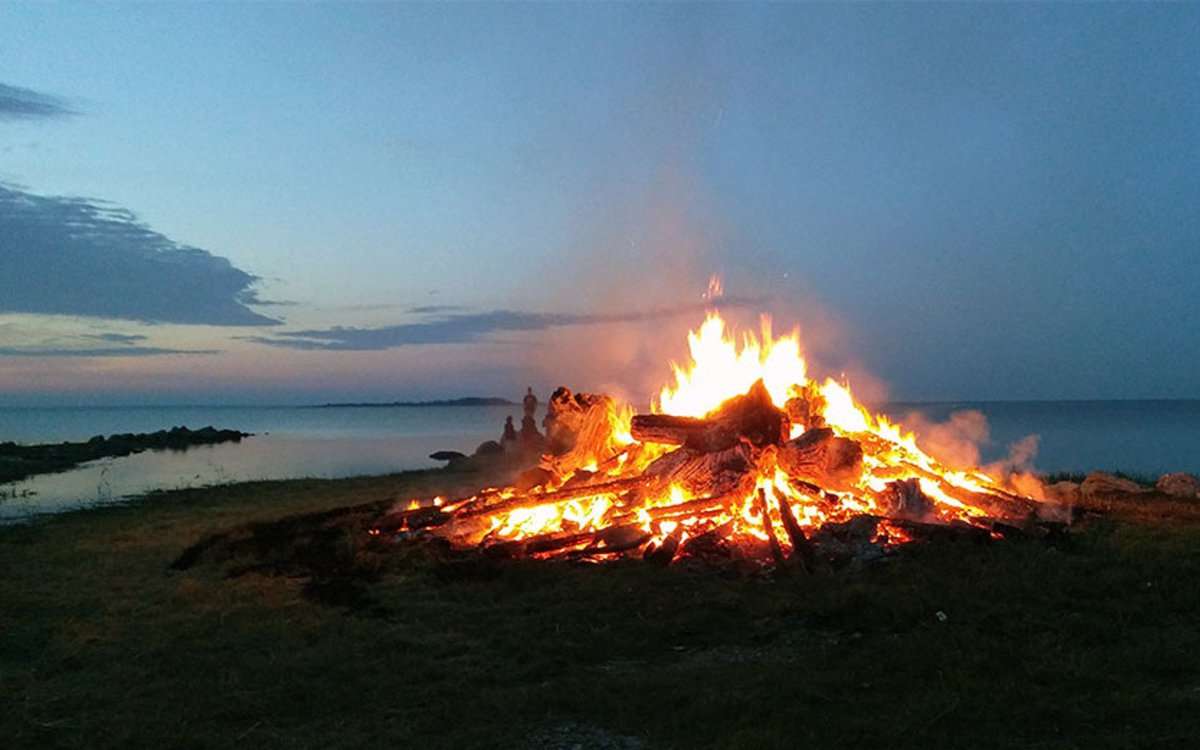 Sõrve Estonian Children’s Summer Camp invites you to join for the evening or overnight to celebrate Jaanipäev, in true Estonian style held at 37 Grevillea Place, Colo Vale NSW.
Damper cooking, social dances, singing and human foosball and of course a bonfire will be lit on the night. Tickets must be bought prior to arrival and dinner is included in your ticket. Click here to purchase your tickets. The meal includes potato & leek soup, hamburgers and delicious cake for dessert with gluten free and vegetarian options available If you are camping, please bring your own tent and bedding. Breakfast will be included, please ensure you purchase the correct ticket if you are intending on camping.
But what is Jaanipäev you may ask?

Where we celebrate our Winter Solstice here in the Southern Hemisphere, in the Baltic states massive parties are held to coincide with the longest day of the year where night seems to disappear when the sun sets late and the night is dusk at most. Midsummer coincides closely with the longest day of the year in the northern hemisphere – the summer solstice. Known as Jaanipäev in Estonia, Jāni in Latvia, Jonines in Lithuania, is an ancient holiday with roots in pagan and pre-Christian beliefs as an evening of food, drink, dancing, traditions, magic & romance.

Documented as far back as 1578 in then-Livonia by Balthasar Russow, historically, the date marked a change in the farming year transitioning from spring sowing to summer hay-making however became an integral part of the folk calendar over the years, alongside its merger with the celebration of Võidupüha (Victory Day), when Estonian forces defeated German troops in Latvia on June 23, 1919 in the War of Independence. Jaaniõhtu and Jaanipäev were so important to Estonians that even during the Soviet occupation, the USSR made no attempt to stop the celebrations, even though it represented the nation’s free spirit. Below are some of the traditions associated with the summer solstice celebrations:

Lighting and jumping over the bonfire is the most well-known ritual and is continued to be practiced to this day. To make it over the flames was to avoid bad luck and jumpers were told to think about the one they loved while jumping over the fire so they will fall in love with them. To not light the fire is to invite the destruction of your house by fire.

An alternative perspective from Lennart Meri (former President of Estonia and writer/film director) was given in his book Hõbevalge in 1976. Meri suggests that the tradition of lighting the fire was said to be part of an ancient re-enactment of the falling Kaali meterotie over 4,000 years ago that landed on the island of Saaremaa. This meteor was seen by the Estonians as a ball of fire chased by eight snakes that mowed down forests, igniting trees and evaporated homes. As the sky filled with black smoke, people looked to the skies with fear. As the day passed and the sun shone again, many wished to avoid this catastrophe from happening again and sacrifices were made to stop the fire from ever falling from the sky again. On the night it is said if it doesn’t rain it will bring everyone good luck and keep the fire burning so keep an eye on the weather radar.

A magical flower was said to bloom for an impossibly short time on the eve of the summer solstice. Closely guarded by evil spirits, the sõnajalaõis (fern flower) is thought to bring fortune, wealth, happiness, love and provide the person who finds it the ability to speak to animals. Often viewed as a symbol of fertility and euphemism for lovemaking (as ferns cannot flower) often young couples would go into the woods to seek the fern flower and the child often being thought of as the fern flower itself. It was also said that anyone who was the first to find the jaaniuss (glow worm) you were to expect a great fortune and a future partner.

Before heading to bed in the morning, women looking to see into the future were told to collect nine different flowers from the meadows and forests. You should do this alone and secretly for the magic to work. Place the flowers under your pillow and you will see your future love in your dream.

Another thing special about Jaanipäev is the dawn. The dew that lingers on the grass has magical powers: use it to wash your face to gain beauty, or turn a somersault on the ground to avoid back injuries. You can also collect the dew in a small bottle and take it home with you. Store it out of direct sunlight and you can use it for up to 50 years and it will not lose its magical powers.

Dawn features in a story that surrounds Jaanipäev is that of distant lovers Koit ja Hämarik (Dawn and Dusk). First published in 1840 by Freidrich R. Faehlmann. In the story, there is the Light- giver (aka the Sun) and two of the Sun’s servants who are blessed with eternal youth.

The Sun tells Hämarik, “To you, my daughter, I trust the setting Sun. Extinguish it and hide the light so that there would be no harm.” In the morning, the Sun tells Koit, “Your job, my son, is to light the light giver and prepare for its another run.” The two only meet for a longer time during the four weeks around the summer solstice to exchange a kiss when the flowers bloom at their most beautiful and the nightingales sing most sweetly.

One interesting thing to note that hämarik itself refers to twilight, which occurs twice a day – first, between sunrise and dawn, and second, between dusk and sunset. In this story though, Hämarik represents dusk (although there is another Estonian word for dusk – eha) Regardless, Jaanipäev has come to symbolise love and celebration across several stories.